I jumped at the chance to participate in the Great Villain Blogathon, mainly because it looked like a hell of a lot of fun, and because it’s been a while since I’ve participated in a blogathon.  Usually I volunteer for these without doing any research, and never know exactly where I’ll end up on the topic at hand.  Such is the case in today’s post, where I got excited to dive into my personal favorite, but flawed, Hammer horror film, The Devil Rides Out (1968).  I suppose the main “villain” in the film  is actually the Devil himself, which is logical enough, but for today, I’ll focus a bit on his chief lieutenant on earth (or, at least in interwar England), Mocata. We’ll get to the M-man in a minute, but first a bit on the film and its context. 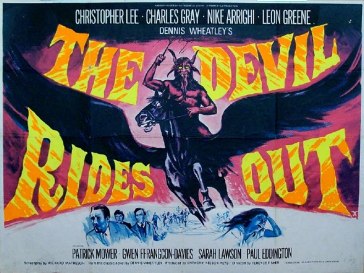 The plot, in case you’ve not seen it, is pretty straight forward–a French-Russian nobleman tries to save the son of a war buddy from Mocata, the leader of a Satanist coven.

The most interesting things I learned about this film had to do with its source material–a novel published at the end of 1934 by Dennis Wheatley–and the time period the film is set in.

Wheatley’s Devil Rides Out novel was the second of a series of eleven novels published over a 37-year period ending in 1970 that featured the often-satanist-chasing nobleman, Duke de Richleau.  Wheatley (1904-77) was acquaintance of Hammer frontman Christopher Lee, who helped bring the novel to the big screen and who played the aforementioned nobleman. Devil Rides Out propelled Wheatley to new heights of success, and as the years went by afterward, he devolved it would seem, into a paranoid, overprivledged man who kept some decidely odd views:

[Wheatley] continued to cultivate his persona as “Britain’s occult uncle,” one on the side of Good who nevertheless had access to Dark Secrets that could be dangerous to lesser men. And he continued the bizarre, and increasingly ridiculous, practice of mixing worldly politics with spiritual struggle as he aged and the world around him agreed less and less with his traditionalist Tory values. “Is it possible that riots, wildcat strikes, anti-apartheid demonstrations and the appalling increase in crime have any connection with magic and Satanism?” he asked in 1971. The answer, as far as he was concerned, was a quite definite yes . . .

. . . [Wheately and his acquaintences] Aleister Crowley, Montague Summers and a handful of other similarly dissipated, over-privileged Edwardians with too much time on their hands had in the decades before [The Devil Rides Out] been largely responsible for reviving the notion of the occult, previously thought banished to the Middle Ages where it belonged, as an at least theoretically vital force again.

What catches my attention here is that in the time The Devil Rides Out was published, and in the time in which the novel was set–it takes place in the spring of 1935, just a few months in the future, given its December 1934 publication date–was something of a revival period for public interest and fear of Satan/ists. This context had started to be explored by the late Joanna Timms, a young, up and coming Australian scholar who was cut down by cancer in 2011 at the age of 24.

She argued that paranormal research and ghost-hunting of the sort done by the Duke in Devil Rides Out  was something of a hobby among several English aristocrats and how some of these, perhaps like the Duke, were attempting to cash in on the public interest of the time to legitimize ghost-hunting and study of the occult as a new scientific discipline.   Fascinating stuff that puts the film in a slightly different light, but I’ve dwelt on this long enough.  Let’s get on to Mocata.

In this telling, Mocata is superbly played by the late Charles Gray (d. 2000), whom we know as Bond villain Ernest Blofeld from Diamonds Are Forever (1971), and as The Criminologist from  Rocky Horror Picture Show (1975).  I say “this telling” because there is also a Devil Rides Out musical running around, which looks worth checking out.

Mocata is a powerful practitioner of the dark arts, and not somebody to be trifled with.  When he warns you that not he, but something will come for you and your immortal soul tonight, you believe him. Do not let his gentlemany demeanor fool you, he is capable of summoning evil incarnate, and he is highly intelligent.

His background is not given much–or any–attention in the film, but making Mocata all the more powerful with the occult is his past a a priest.  At some point in the distant past, we learn from Wheatley’s novel, Mocata developed an interest and became quite a powerful occultist while serving as a parish priest in Lyons, France.  (p. 288) An unspecified scandal drove him out of the Church, and he apparently developed into a coven leader and attracted a following of aristocratic believers in the occult, possibly something along the lines of what Timms suggested about the time.

Concluding, I suspect Mocata and The Devil Rides Out are probably easy pickings for some entrepreneurial re-boot/re-imagining specialist in Hollywood, which would be a cringeworthy thing to witness indeed.  What would be lost is the unique context and some of the blend of public fascination and fear of ultimate evil that we get in the original. Unless such a (hypothetical, so far) re-imagining deals with Mocata’s back story–that he’s driven to “the dark side” because the Good betrayed him in some way, the result will be sad.