Twenty years ago today we lost actress Alexandra Hay.  She died of a heart-related condition at the much too-young age of 46.

She’s best known, perhaps, for her starring role in 1,000 Convicts and a Woman.  She got her start as a a model at the age of 12, but when her mother passed away when Hay was 16, she went to the UK and married her legal guardian there so she could stay in Europe.  When she returned to the States they had the marriage annulled.  One of her first roles upon her return was a stage play The Beard, she (and other cast members) were arrested several times for obscene language and being nude on onstage.

On film, she had some bit parts opposite some huge stars.  She was opposite Dean Martin for a bit part in The Ambushers (1967); she memorably recited ice cream flavors to Spencer Tracy and Katherine Hepburn in Guess Who’s Coming to Dinner (1968): 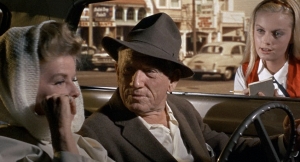 Hay’s career trajectory hinged on two roles: first she had a small part in Skidoo (1968), generally considered these days to be a thoroughly misconceived Otto Preminger comedy with Jackie Gleason, Groucho Marx, Mickey Rooney, and Frankie Avalon, among others. 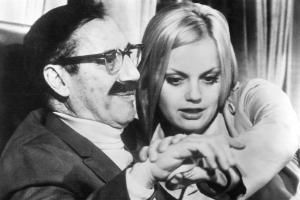 Next, was The Model Shop (1969), where she had a larger role playing Gary Lockwood’s live-in girlfriend. However, that movie didn’t fair well at the box office either. These and a couple other mediocre films, such as The Love Machine and the aforementioned 1,000 Convicts and a Woman, forced Hay to find work on the small screen, where she found roles in Mission: Impossible, Love, American Style, and the TV movie The Screaming Woman, which also starred Olivia de Haviland.

She tried, mainly unsuccessfully, to boost her career by appearing nude in the February 1974 issue of Playboy, but the roles that came out of that were in some pretty lame fair: How Come Nobody’s On Our Side (1975), also starring Penny Marshall and Rob Reiner was pretty much an embarrassment for all involved.  The end came in 1978 with a small role in the Jack Palance vehicle, One Man Jury, a blatant Dirty Harry/vigilante cop ripoff.

The most complete biography I’ve found on Hay suggests that after this, at some point in the early 1980s she called it a career, and died a decade or so later.  Not much information out there that’s readily available on what she got up to in retirement–she’d have been in her mid-30s or so.

But there may be a little more to Hay’s story: her last role may have been in 1988, when, according to the Toronto Star, (“Royal Pain,” November 12, 1988) after a 16-year hiatus after principle photography, post-production finally wrapped on a Clyde Ware film Another Time, Another Place.  Apparently, Hay played a small town waitress who followed Martin Sheen to New York.  But because the original material was shot in 1972, Sheen and Hays’ material were flashbacks for the tribulations of Hay’s daughter in the film.

However, IMDB lists this film as coming out finally in 1992–-fully two decades after Hay would have been on set, and a year before her death.  The 1992 version was without Sheen. and IMDB lists Hay as a different “Alexandra Hay”–Alexandra Hay II.  II’s only other role is one episode of a 2002 TV series called The Strip, which is most of a decade after the actual Hay passed away.  This confusion shows us yet again that for more obscure films and actors, IMDB is not necessarily an authoritative source.

At any rate, Hay’s career is probably best summed up as a “near miss”–she clearly had the looks and the acting chops to be a leading lady, but what she did not have was a good break to give her the opportunity to go further than she did.